Blender is a widely used rendering engine in the world, but you can need a strong rendering farm to work with Blender. So what are the best Blender render farms? In this article, we will show you the 5 best render farms for Blender in 2023.

What is Blender online render farm?

An online render farm is a cloud-based rendering service that uses node-based cores with powerful GPUs to accelerate the rendering process. Rather than having one machine responsible for creating a whole animation or presentation on its own, you can command the power of thousands. In an instant, hours of rendering time are reduced to minutes. Individuals, freelancing 3D/CG artists, and animation studios who want to access more rendering capacity and maximize their productivity can use it.

The advantages of using an online render farm are obvious.

Which rendering farm is better for Blender, though?

What are the best Blender render farms in 2023?

There are many render farms to choose from, making it tough to find the ideal one for your team or project. There are various aspects to consider before using any service, as there are with any other.

We will analyze the top three best Blender render farms in 2023 to make your decision easier.

SuperRenders Farm was founded in California, USA in 2010 as a small local rendering company. In 2017, we began to grow considerably by developing online render technologies. Super Renders Farm is a cloud rendering service that is based on SaaS (Software-as-a-Service) and IaaS (Infrastructure-as-a Service). We supported all major apps used by the industry 3dsMax, Maya, Blender, Houdini, SketchUp…

Super Renders Farm offers users two rendering methods: submit jobs to the render farm via Web or Desktop Client application. If you choose to use the Web, then you only need four steps after creating an account, uploading resources, submitting the job, analyzing the scene, and rendering. If you are using the Desktop Client application, they only support Windows operating systems, which allow you to submit render jobs directly from 3D applications such as Maya and 3ds Max.

Super Renders Farm based on IaaS model. It allows users can control every aspect of rendering from choosing the hardware to installing software, plugins, and scripts, using their remote servers as your computer, and more. So, you can install any  renderers.

You can select a wide variety of service package including CPU rental packages or GPU rental packages (namely GTX 1080Ti, RTX 2080Ti, RTX 3080, or RTX 3090 which are all the state-of-the-art and newest ones in the market). Using Super Renders Farm service will not limit your types of plugins, software version or GPU/CPU rendering.

Super Renders Farm has a 7×24 real-time service, so if you encounter any difficulties while rendering, the technical support staff is always available to help you remotely. Its pricing is very reasonable and very cheap compared to the price of market. 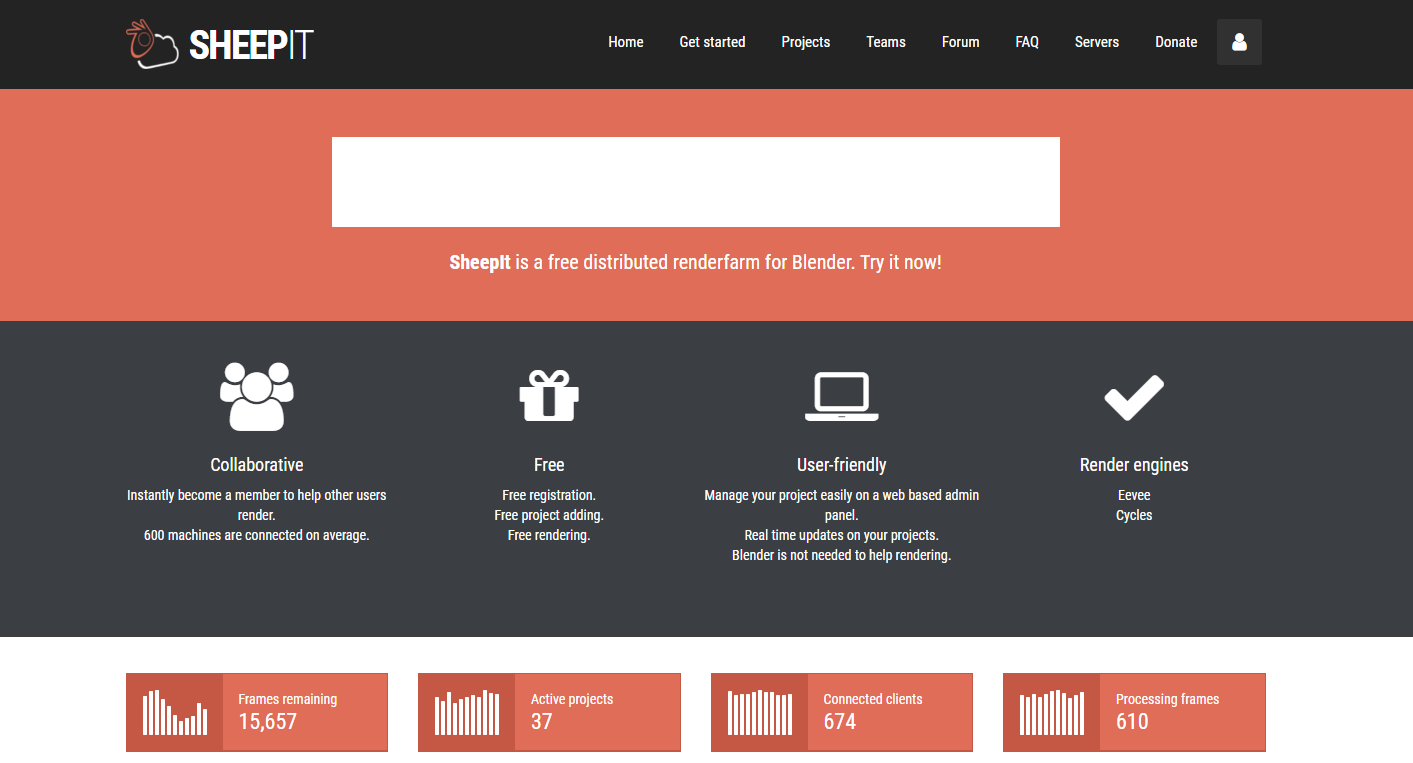 SheepIt is a free render farm for Blender. The difference compared to other render farms is in the word distributed, as in the service doesn’t own machines that render, but instead relies on people to share their computers. Thus, there is virtually no limit to the amount of power the render farm can have. When the owner of a project adds their scene to the jobs to queue, the service splits the animation into single frames to render, sends each frame to a connected computer and aims to optimize its choice based on the available memory, as well as the CPU/GPU power.
Features:
Free to register, free to use;
750 machines are connected on average;

Manage your project easily on a web based admin panel;

Real time updates on your projects;

Blender is not needed to help rendering;

Fox Renderfarm is a leading cloud rendering service provider in the industry. Since the operation in 2011, Fox Renderfarm has earned a good reputation for its quality performance, great customer service, and flexible pricing scheme. With over 20 years’ experience, the pioneering core team served more than 200,000 users and top leading visual effects companies and animation studios from over 50 countries or regions, clients including multiple awards and Oscar winners.

Rebus is a company in Germany who provide high performance 3d rendering service. It has more than 15 years of experience in the field of 3D rendering and gets the trust of many big studios and companies. No doubt if it could be one of the best render farms for Blender. It provides SaaS platform They develop tools called Rebusdrop which can be added to your own software and you can just render from your software.

GarageFarm is a small team of tech and 3d enthusiasts who one day decided to set up their own farm in GarageFarm after years of painful and horrible experiences with rendering farms. GarageFarm allows you to upload and manage your projects with ease. With intuitive and lightweight plugin, you can submit your .blend scene easily and seamlessly from within your Blender GUI.